For over 25 years, America's Favorite Dragapella® Beautyshop Quartet has served up a feast of music and comedy to audiences at performing arts centers, music venues and comedy festivals throughout the US and internationally! Their phenomenal performance record includes an Off-Broadway show, an extended run in Vegas, two feature films and three concert DVDs, ten albums, and appearances in over 40 US states, Canada, Mexico, Europe, and Australia. The Kinsey Sicks' award-winning a cappella singing, sharp satire and over-the-top drag have earned them a diverse and devoted following.

The Kinsey Sicks began in 1993 as a group of friends who went to a Bette Midler concert in San Francisco dressed as the Andrews Sisters. Assuming they'd be among many drag queens, they found themselves to be the only ones (other than Bette, of course). They were approached that night to perform at an upcoming event. Their reply - "we don't sing" - was quickly disproved when they realized that all of them had musical backgrounds. They began singing and harmonizing that night, and the seed for the Kinsey Sicks was planted. 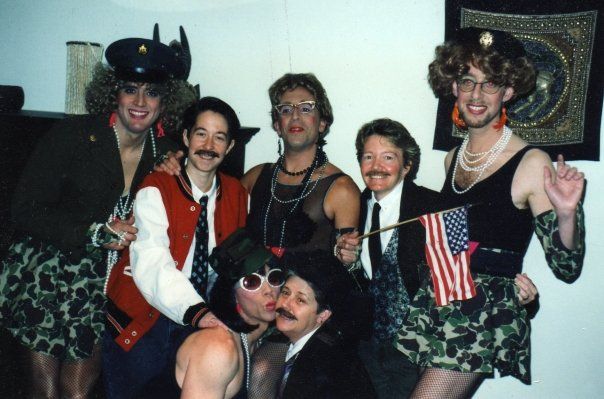 In July 1994, the Kinsey Sicks drew a large and enthusiastic crowd at their first public performance on a street corner in San Francisco's Castro District. Since then, The Kinsey Sicks have produced and performed full-length theatrical productions around the country in such prestigious venues as Herbst Theatre in San Francisco, the Nordstrom Recital Hall in Seattle, the Broward Center in Ft. Lauderdale, the Hobby Center in Houston, the Wheeler Opera House in Aspen and the Pacific Design Center in Los Angeles.

Their earliest shows, such as Sicks Appeal, Sicks-Tease, The Balled Sopranos, Motel Sicks: A Dragapella Summer Vacation, Everything But the Kitsch 'n' Synch, and GreatesTits, all premiered at San Francisco's New Conservatory Theatre Center. Their more recent musicals - I Wanna Be a Republican, Oy Vey in a Manger, Wake the F@#k Up America, Each Hit & I, Electile Dysfunction, America's Next Top Bachelor Housewife Celebrity Hoarder Makeover Star Gone Wild, and Things You Shouldn't Say - have toured internationally and have drawn the attention and devotion of unexpectedly diverse audiences.

In 2001, the girls produced and starred in the critically-acclaimed Off-Broadway hit, DRAGAPELLA! Starring the Kinsey Sicks at New York's legendary Studio 54.

That production received a nomination for a Lucille Lortel award (the Off-Broadway Tony) as Best Musical and a Drama Desk nomination for Best Lyrics.

In 2006, the girls wowed audiences with a much-coveted extended run of DRAGAPELLA at the Las Vegas Hilton. The first-of-its-kind, all live-singing drag revue show was ranked by critics as one of the best shows in Vegas, and heralded by reviewers as "a feast for the eyes, the ears, and the funny bone." The Las Vegas run inspired the behind-the-scenes acclaimed 2008 documentary, Almost Infamous.

The Kinsey Sicks have recorded several albums: Dragapella, Boyz 2 Girlz, Sicks in the City, I Wanna Be a Republican, Oy Vey in a Manger: Christmas Carols and Other Jewish Music, Sicks! Sicks! Sicks!, Each Hit & I, Electile Dysfunction, their ninth album Eight is Enough, and their pandemic-era collection Quarantunes. They have been profiled on national television, including 20/20 and CBS Early Show with Bryant Gumbel, and were the subjects of a lengthy cover feature in the arts section of The New York Times and a profile in The New Yorker. They've also appeared as performers on the finale of RuPaul's Drag Race Season 8 and on NBC/Seeso's digital comedy channel.

The girls are also the subjects of two feature films (a concert film - I Wanna Be a Republican - and a behind-the-scenes documentary - Almost Infamous - chronicling the adventure of the group's 2006 extended run at the Las Vegas Hilton), and have released several DVDs of their shows: Electile Dysfunction, America's Next Top Bachelor Housewife Celebrity Hoarder Makeover Star Gone Wild, and their latest 25th Anniversary show, Things You Shouldn't Say.